The masons' marks at Wighton 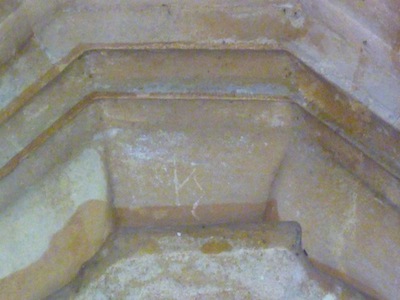 The nave of Wighton All Saints is inscribed with an unusually large number of masons' marks. In all, there are some 200 examples of 14 different devices on the piers of the nave, the arcade arches, the chancel arch piers, the window reveals of the north aisle, and the north and south clerestories. No one has been able to prove conclusively why such marks were made, but they were almost certainly 'signatures' of individual masons made so that the quality and/or number of blocks produced by that mason could be monitored.

The interesting thing about the Wighton marks is what they tell us two key things - that the masons worked mostly in two teams (one on the north side of the church and the other on the south side), and that many of the same masons also worked on nearby churches. About half of the marks at Wighton can be matched with marks at eight other churches within a 30-mile radius. Most importantly there are matching marks at St Nicholas Chapel, Kings Lynn - which was one of the most high profile building projects in Europe at the time. They are also at All Saints, East Winch; St Margaret's, Kings Lynn; All Saints, Litcham; St Peter's, Weasenham; St Martin's, Fincham; and St Peter's, Walpole. There are also records of matching marks at Little Walsingham (which burned down in 1961 and has been rebuilt since).

By analysing what we know about the building dates of these churches it has been possible to narrow down the point when the nave at Wighton must have been under construction to the period 1415-1420. Because six masons at Wighton also made their marks at East Winch, for which we have documentary evidence dating it to 1416, the most likely date that work started in Wighton is 1417.