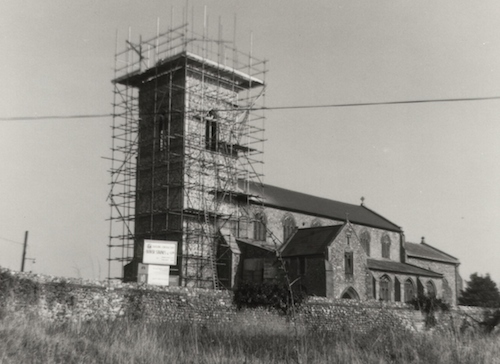 The tower collapsed in at about 8pm on the night of November 27, 1965. There had been some concern in the village about a vertical crack which had developed during storms earlier in the year, but recent surveys of the church fabric had not given cause for immediate concern. When it came however, the collapse was a dramatic one - some 400 tonnes of masonry, including almost all of the west wall, crashed to the ground, sweeping away part of the churchyard wall and blocking the road. Thankfully, no one was hurt.

The road was cleared and emergency repairs and a temporary roof were made to prevent further damage and to keep out the weather. But there were no funds to rebuild it. Then in the early 1970s a Canadian businessman, Leeds Richardson, who had traced his ancestors to the village and was shocked to see what had happened to the tower, made an extraordinary gesture. He wrote to the vicar offering to pay for a new one. His donation of 100,000 Canadian dollars was enough to rebuilt it in similar style to the original, and he asked for it to be renamed the Trillium tower after the state flower of his native province of Ontario.

The new tower was built by Oliver Staines & Son of Swaffham and formally topped out and rededicated in 1976. New bells were also installed.