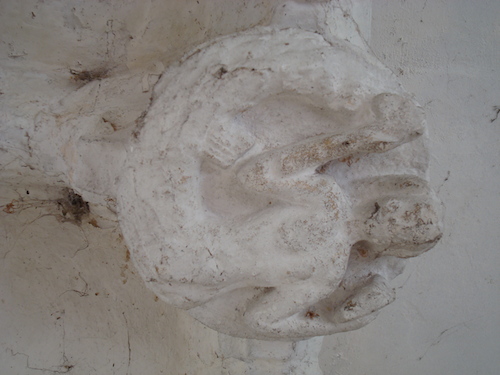 The porch was built as one of the last stages of what turned out to be an 80-year rebuilding programme for Wighton church. The two stone bosses set above the side windows, seem to have been intended as “springers” for a roof vault which was never finished. Such high-spec work was not very common in the porches of Norfolk parish churches of this time, and the subject matter is also unusual. One shows a mermaid, the other the severed head of John the Baptist. John the Baptist was an important and popular saint. Mermaids were much less common. So why is she here in Wighton, and how might she have been understood by 15th-century church goers, especially when posed opposite the head of St John?

By late 15th-century these exotic beasts had a long and complicated history and they seem to have been considered as both good and bad. On the bad side, sirens or mermaids were associated with at least four of the seven deadly sins: they were considered whores and examples of sexual enticement and lechery; singing mermaids symbolised avarice; pipe-playing mermaids, pride; and those (such as this one) holding a comb and mirror were also associated with vanity. But a mermaid could be used as a badge of nobility (or at least gentility) and even enliven royal pageantry (as they did at the wedding of Henry VIII and Catherine of Aragon. Other mythical beasts also had overtones of both virtue and vice. The griffin - an extremely common beast in medieval heraldry, art and architecture - could be associated with both Christ and the Devil.

So while Wighton mermaid could have served as a warning against vice for parishioners entering the church - while St John the Baptist was installed as a symbol of virtue, it is also possible that these bosses were symbols of the virtuous gilds, or individuals who had donated money to the building of the porch. Wighton is only a couple of miles from Holkham and Wells, both busy sea ports at the time. Its wealth seems to have been built partly on the herring trade. The mermaid may have represented someone who had made money in this way. In the same way, St John the Baptist was often associated with shepherds and sheep farming. So was our mermaid a symbol of virtue or vice? We will probably never know for sure.