The stained glass at Wighton 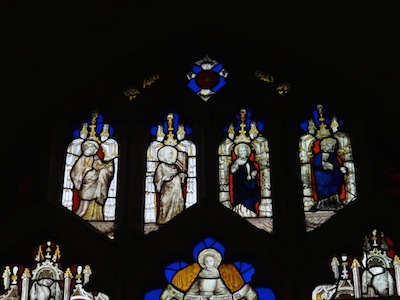 John Wighton (also known as John Harrowe) was probably born in the village in the 1380s and lived until 1457 when he left money to his sister who was still living in Wighton. His workshop in Norwich produced some of the most important stained glass of the fifteenth century - and it is likely that this includes the glazing of part of the famous Toppes window in St Peter Mancroft, Norwich, the Norwich guildhall, and the spectacular east window at East Harling. More locally, some of the best surviving medieval glass at Cley, East Barsham and Field Dalling is almost certainly by John Wighton and his team.

At Wighton the most important medieval glass, which is almost certainly by John’s workshop, is in the two east aisle windows. In the south east window are our female saints - though it isn’t entirely clear which ones. In the left hand light, the first figure is carrying a sword or possibly a stake. The second has been restored as St Catherine and, the third, who is holding a demon on a chain, is likely to be St Martha or St Juliana. The right hand figure is St Agatha, who was tortured with a flesh-hook, with which she is depicted. Meanwhile, in the north east window are four of the Apostles: Paul, Andrew, Bartholomew and Peter.

The two western windows are decorated with 15th- century depictions of angels. On the south side they are playing rebecs - a sort of forerunner of the violin (not that one of them is left handed), and on the north side, they are standing on wheels (angels weren’t believed to have legs).

It is important to realise that parts of some of these figures have been repainted and it is very likely that they are not in their original positions. The angels for example were probably first placed high up in the clerestory windows.